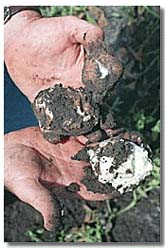 Seems to me that Clinton's "One America" idea has a lot to do with rotten potatoes.

A million people died because of a practice called "mono-cropping". There was one kind of potato planted and when the airborne pathogen attacked the crop there was nothing to stop it. This "blight" attacked and rotted potatoes in the fields as well as those already in storage. With no other main food source to depend on, people starved to death.

Dangerous to put all of one's "genetic" eggs in one basket, one runs the risk of loosing everything.

"The rapid loss of biodiversity remains mankind's greatest threat". So reads the opening words of the USGS GAP Analysis program. The expanded title of this current national program is GAP Analysis - A Geographic Approach to Protection of Biologic Diversity.

The understanding of this risk resulted in 1992 in a United Nations conference on Biodiversity. What follows are some excerpts from the United Nations Biodiversity Treaty that was signed by every nation. Two of the points I want to mention are:

Now perhaps for the sake of argument or just as a thought exercise, I suggest that the reader take out the word "ecosystems" and substitute the word "culture". How does it read now? Seems to make sense, doesn't it. Cultures are as unique as ecosystems and although they don't receive the same amount of attention, I propose that cultures are every bit as important as ecosystems. I also propose that the health of the cultures on this planet, the diversity of cultures on this planet are every bit as essential to the survival of mankind as is biodiversity.

A lot of ink and energy has gone into the marketing of the idea of this concept of "One America", and I find the idea of homogeneity with respect to maybe anything other than a milk shake, a bland, unpalatable and more than likely dangerous idea. Elimination of cultural diversity in my opinion is one of the surest ways to insure that we humans as a species will not last much longer on this planet.

Sometime if you have the opportunity, pick up a small book called "The Giver" by Lois Lowry. It's fiction, but it tells what happens when there is no individuality, when no one remembers "how it used to be", or "the way they used to do things". The is a uniformity and a sameness and there is no color...no one in this story can see color in anything. It's unnatural, it's empty and I for one have a hard time seeing the point of existing in that way with no history, no culture, no diversity or no roots, where everyone is the same.

"One America" sounds like this book to me. It says in essence, why profit from the experiences of others, why acknowledge that others may have something to contribute to the mainstream culture. It says the mainstream culture is complete and it has all of the answers. It says to Native people, the original caretakers of this land, we, the people of today don't need your old ideas, we have new ones, better ones. The fact that indigenous people have anything to offer is ignored by the One America proponents.

It seems to me that One America asks that we move toward the idea that cultural diversity is no good, uniformity is better...let's all be one big group. Why plant more than one variety of potato, we like these potatoes. At one time the indigenous people of this land cultivated thousands of varieties of potatoes, some that would grow in a small area, some that needed very little water, and some with marked disease resistance. Think of it, that many kinds of potatoes with that much genetic diversity, offering almost unlimited protection from the mass devastation that the Irish experienced. Just one example of how the knowledge of one culture could have save the lives of over one million people of another culture.

So what do Native People have to offer the dominant culture in this country? Can they offer anything or do we know all that we need to know? History, however biased, tells us the answer is yes. Agriculture, medicine, politics...this country could use improvement in these areas and many more. The ancient and modern Native Peoples did things differently than mainstream America does things...maybe we should ask for their suggestions and for their help and for their perception before we put them into the political blender and make them part of One America.

Nairobi, 8 February 2001- "Nature's secrets, locked away in the songs, stories, art and handicrafts of indigenous people, may be lost forever as a result of growing globalization, the United Nations Environment Programme (UNEP) is warning."

Let all that is Indian within you die! The Reservation School system 1870-1928

One America - A Presidential Sham

Genocide and The Land of the Forgotten...

Comments may be sent to... Sonja Keohane